What is Moore Blues for Gary?

Gary Moore is the answer!

They all came together to pay tribute to the Irish king of the frets!

Moore Blues For Gary is a tribute album put together by Bob Daisley.

Bob Daisley played bass guitar on many of Gary’s albums and live tours. Bob was initially recommended to Gary by Sharon Osbourne, wife and manager, of the one and only Ozzy Osbourne.

Bob felt that he needed to do something to celebrate Gary’s massive contribution to music and guitar playing after his untimely death.

How did Gary Moore die?

Gary passed away much too young at the age of 58 while on holiday in Spain on 6 February 2011. He suffered a heart attack.

He is buried at St Margaret’s Church, an Anglican church in Rottingdean, in the English city of Brighton and Hove.

Moore Blues for Gary is a fitting tribute to the blues and rock guitar legend by one of his own – bandmate, musician and friend.

Bob Daisley has pulled together a “who’s who” of guitar players and musicians on this tribute album.

He describes the album as a ‘hat’s off” to Gary focusing on Gary’s blues era.

However, anyone who is a fan of his guitar playing knows he was really able to play it all from rock to jazz.

When is the album released?

Bob Daisley has gathered together some superb guitarists to work their magic on 13 of Gary’s songs.

Want a sneak preview of John Sykes playing Still Got The Blues?

This is what John Sykes had to say about Gary on his untimely death:

“Our condolences to the family of GARY MOORE – one of the greatest guitar players ever. A very sad loss for the music world. His playing will inspire generations to come. God Bless. Love and respect.”

Check out the mighty John Sykes playing Still Got the Blues!

John Sykes displays the guitar chops that we have all love and have missed in recent years.

It’s great to hear him playing this Gary classic!

Sykes tips the hat to Gary but adds his own distinctive wide vibrato with the distinctive Les Paul/Marshal combination searing through the speakers.

For me, my two favourite John Sykes guitar moments are his playing on Thin Lizzy’s Cold Sweat and Whitesnake’s Still of The Night

John is joined on Still Got The Blues with Danny Bowes of Thunder on vocals and Don Airey on keyboards.

Steve Morse has said in a Classic Rock Revisted interview:

“His playing was lively, energetic, but tasteful at the same time”

Check out Steve Morse on guitar and Ricky Warwick on vocals on Parisienne Walkways!

Who else is playing on Moore Blues for Gary?

Gary Moore recorded two albums celebrating his guitar heroes – Blues For Greeny in tribute to Peter Green and Blues for Jimi in tribute to Jimi Hendrix – how fitting it is that some of our current guitar greats are now paying tribute to Gary.

I cannot wait to hear the whole album in it’s entirety.

Along with John Sykes and Steve Morse, check out who else makes an appearance.

Steve Lukather plays on the song The Blues just got Sadder.

Here is what Steve had to say about Gary:

“The world lost a Giant… Gary Moore. I was a fan for sure. Amazing touch and chops… whew… fire! I had the honor of sharing the bill with him in 2001 at Montreux Jazz Festival. I was with Larry Carlton at the time… he was such a nice guy and a MONSTER player. He will be missed. Man… this stuff is happening WAY too much for me. I pray you are all well and God bless.”

Doug Adlrich who plays Gary’s classic instrumental The Loner on Moore Blues for Gary had this to say on his Twitter account on the third anniversary of Gary’s passing:

‘3 years since Gary Moore passed away…. Still stings.. But he still inspires….RIP GM.’

Brush Shiels is on lead vocal duties on Texas Strut

Gary got his first big break in 1968 when he joined Dublin based band Skid Row with Brush Shiels and Noel Bridgeman.

Check out the video below to hear Brush’s memories of the young Gary Moore!

Gary’s sons, Gus Moore and Jack Moore, perform This One’s For you.

Much gratitude must go to Bob Paisley for pulling this all together.

Here he is talking about his time playing with Gary Moore.

Moore Blues For Gary  – A tribute to Gary Moore is being released by Ear Music.

Ear Music is the international record company of Edel Group. The label specialises in rock music – with such rock acts as Alice Cooper, Chickenfoot, Skunk Anansie, Deep Purple, Status Quo, Foreigner, BABYMETAL, Gamma Ray, Marillion, Tarja, DragonForce, Thunder – on their repertoire. The company is based in Hamburg in Germany.

1. That’s Why I Play The Blues

2. The Blues Just Got Sadder

Here is my little tribute to Gary Moore! Still Got the Blues outro played on a Vintage Lemondrop.

Gary Moore and BB King – The Thrill is Gone!

This live recording of the two legends playing on The Thrill is Gone is a must see for all blues guitar fans – Gary Moore and BB King are jamming together in that great blues gig in the sky I have no doubt!

BB King played in Gary Moore’s 1992 album After Hours on the song Since I met You Baby! 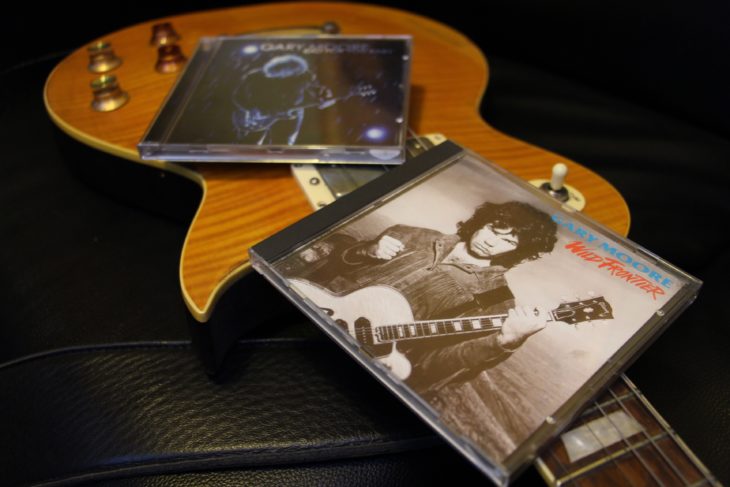 Kirk Hammett from Metallica now has the famous Les Paul.

Google ‘how much did Kirk Hammett pay for Gary Moore’s Les Paul’ and you get the answer less than $2 million dollars!!!

A bargain no doubt!!!

There is much online debate about this guitar now being in the hands of Kirk!

I for one think it is a good thing!!!

Kirk is obviously is a fan of guitars regardless of what you think of Metallica or his playing in recent years!

For me, he was my metal idol when I was growing up learning to play guitar and listening to Ride The Lightning, Master of Puppets and And Justice For All.

Moreover, he is using the guitar live rather than it being bought up by a collector to lie in a bank vault or hang on a wall as a trophy!!!

Check out Kirk talking about the famous Les Paul