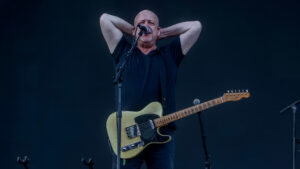 MADRID, SPAIN – JULY 09: Pixies vocalist Black Francis performs at the Mad Cool Festival, 2022, in Valdebebas, on July 9, 2022, in Madrid, Spain. The alternative rock band was formed in 1986 in the city of Boston. Florence and the Machine’s sound is a combination of several genres, including rock and soul. The largest music festival in Madrid, Mad Cool, joins this July to the great formats that return after the pandemic, and does so coinciding with another of the macro festivals with which the cake of the Spanish musical summer is shared. Since its birth in 2016, Mad Cool has climbed steps to become one of the Spanish festival events with the most ambitious lineup. (Photo By Ricardo Rubio/Europa Press via Getty Images)